A Piece of Mind: The Right Honourable Steve Webb 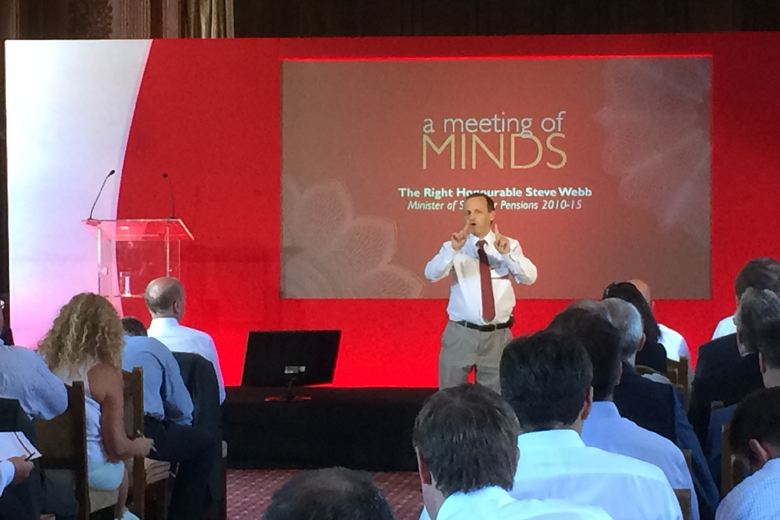 We talked about all things pension freedoms, auto-enrolment, reputational risks of the recent pension reforms and where to from here for the outgoing Minister.

About Steve Webb: Webb is a Liberal Democrat who served as the Minister of State (Department for Work and Pensions) for the period between 2010 and 2015. His career as Minister of Pensions has been characterised by three key pillars: triple lock guarantees, auto enrolment and pension freedoms.

Pension freedoms: a threat or an opportunity for the modern adviser?

Owen James: In the research leading up to our June 2015 Advisory Distributors Meeting of Minds, pension freedoms was flagged as both a threat and an opportunity, why would you say this is?

It can be both. Pension freedoms have the potential to make pensions popular. Instead of being this boring thing that is restricted and nobody really wants to think about, people are now able to go ‘hang on, my boss is giving me this money and the government is giving me this money and I am able to spend it on whatever I want when I’m 55?’ But there are also risks in trusting people with their own money in case they go off and buy the legendary sports car.

Owen James: So how will this impact the average consumer?

It seems to me that the people at the top of the income pile will always be ok, they’ll pay for advice. People with very small pots will just take cash and it won’t impact them very much. It is people in the middle who may face a challenge. In the past they would have simply bought annuities. Now they will have a set of options to choose from and we can’t expect them to become financial experts overnight. Whilst the Government has promised to give them Guidance –with a capital G – they’ll need advice. We can’t just expect them to stab in the dark. The challenge is getting people to understand the value of advice. I personally think there is still a gap in the advice market.

Role of the adviser in a decade of innovation

Owen James: What is the role of the adviser in the new pension climate?

It is forever changing isn’t it? You have the pension freedoms that came in in 2015. Then in 2016 a set of people will be able to sell the annuities they have already bought for cash which is something I am quite keen on. Part of the challenge for the adviser is being on top of everything – somebody needs to be monitoring all the changes so that people can make informed decisions. Keeping on top of the market is key. Someone used the term ‘a decade of innovation’. Things are changing rapidly and we are starting to see new products, hybrid products.

Owen James: Culture and innovation are two big drivers coming out of the FCA we see across the financial services market. One of the challenges is that innovation seems to be moving slowly – particularly for the middle market section discussed previously. The big challenge for a lot of the advisers is affordability and how to provide cost effective advice to the middle market. Do you think it is something we should be worried about?

Clearly you have to get consumers to value advice. Say for example the value of the advice is £1000, but customers only attach a value of £200 to it, then you have a problem. Part of that is educating consumers. And Pension Wise will play a role in that. Customers will learn that they have more options and therefore will need advice. That said, advisory services clearly need to strip out unnecessary costs.
I don’t think there is a silver bullet in any of this. However, I do think using technology to do the bits that technology is good at and to get rid of unnecessary costs whilst leaving the more tailored bits to the advisers, is important.

Owen James: There is a lot of focus on the ‘robo-adviser’ and the threat it could pose.

Robo-adviser to me is just a Decision Tree proposition with a clever front end. There are reasons why governments have tried and failed to bring in Decision Tree.

Winners in the pensions revolution

Owen James: The average age of the adviser is say 56. A lot of them are leaving the industry and they say ‘you know what – I have had my time, I just want to take it easy’. Add to that the fact that there is a growing savings gap. The old traditional life offices have changed now with the rise of platforms and you have got vertically integrated firms who are both advisers and distributors. Who do you see being the big winners in this pensions revolution?

I think there will be new entrants. A labour market trend we have seen is more self-employment. Whilst auto-enrolment may be great, one of challenges is that no government has a plan for auto-enrolment for the self-employed. A flexible labour market means that advisers who aren’t dependent on the work place potentially have new markets. The other group is the people who take advantages of the freedoms. You’ll have a set of people with defined contribution (DC) pension pots – including those transferred out from defined benefit (DB), who are going to want to do interesting things with that money. People who make it easy and have listened to what consumers want stand a chance to get the lion’s share.

Owen James: You have started this phenomenal journey for pensions. Are there any concerns with trains going down the track that any of them are going to de-rail?

I was always sensitive to what I called ‘reputational risks’. I would give the example of auto-enrolment. It is basically a good thing. But all it would take is one person auto-enrolled into a poor value scheme, or a rip off scheme, and that would be all over the papers.
My job with auto-enrolment for years was to keep the reputation up – to keep the trains on the tracks. You are already seeing the negative headlines with the pension freedoms such as accusations that insurance companies are sitting on the money. A lot of the reporting is pretty muddled. For example, say I go to my insurer and I have a pretty big pot owed to me. However, the government says ‘you have got to have Advice’ with a capital A before you can access the pay-out. The customer may then get aggravated. That individual then rings up the newspapers and says it’s a disgrace that the government and insurers won’t let me have my money.
There are reputational risks, there are always scammers about so there are bound to be incidents. However, there is a limit to how much you can stop someone from getting ripped off and how much you can encourage a customer to do something, even when it is in their own best interests.

Owen James: Ros Altmann, who has now joined as the Pensions Minister, has said that her priorities are to strengthen British pensions, promote later life incomes and protect the pensioners of today and tomorrow. What do you think she needs to do to achieve this?

Keep up the good work of her predecessor [laughs].  As you say, there are a lot of trains on a lot of tracks, so she needs to see through the state pension reforms to ensure people are aware of where they stand. This may not always be as clear as you think. We still have another five million people to auto-enrol into pensions, so that needs to be done. I also think we need to get people beyond the 8% pension contribution by 2018. When we did modelling at the DWP (Department for Work and Pension) as to what makes pension outcomes good, we tweaked different scenarios including lower charges and working longer. The only thing that moves the dial is putting more money into the pot, as obvious as that sounds. We have to be relentless in encouraging people to increase their pensions early enough in their lives. Everything else is second order.

Owen James: Of your three pillars -triple lock guarantees, auto enrolment and pension freedoms- which are you most proud of?

Funnily enough, none of those. It is the new flat state pension that will come into play next year that I am proud of really.
Kids who are now teenagers will start work soon and in 35 years’ time they’ll get the flat pension which will be a lot fairer to women, the lower income bracket and so on. It will take a while before it becomes simple, but is simpler. And that is something I made happen.

Owen James: Where to from here?

I have slightly got the pensions bug so I am pretty sure that I will remain in the pension’s world.