WHERE WILL THE RETURNS COME FROM NOW? THE HUNT FOR INCOME AND YIELD IN A LOW INTEREST RATE WORLD 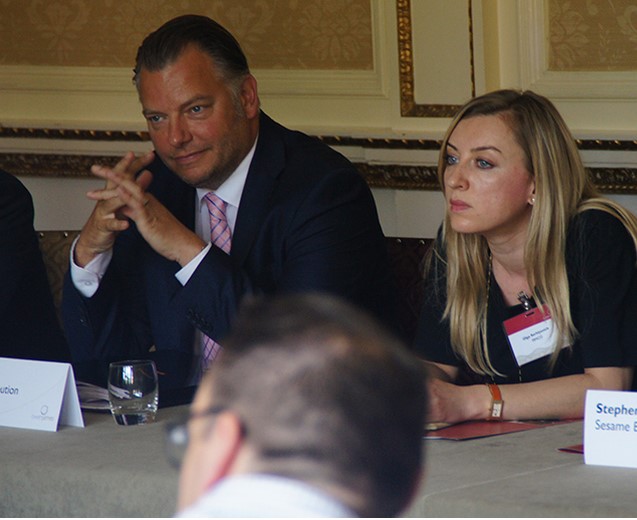 Invesco Perpetual introduced the discussion with a succinct presentation on the global macroeconomic outlook. The forecast for 2017 is troubling: interest rates are down to 0.25% in the UK, there is an unclearly-shaped Brexit on the horizon and long-dated bond yields are close to 0%.

Delegates came together to discuss these implications of increased volatility for managing investor portfolios.

Invesco Perpetual introduced the discussion by outlining the overall economic picture. Globally we have been in an extended period of low growth and low inflation. Earnings growth has also been limited in the past several years.

Monetary policy was geared towards staving off a depression in 2008 and 2009; this defensive approach continued in the form of the first interest rate cut by the Bank of England in seven years in August, to 0.25%. But now central banks are running out of road with few if any tools left to stimulate growth.

The attention is naturally turning to fiscal policy. In the United States, talk of a Trump-led infrastructure boom is fuelling expectations of reflation on the horizon. There are hopes of future tax cuts for business, intended to galvanise investment spending. However:

“In reality, it is simply too early to be betting on the reflationary horse. The biggest question around Donald Trump’s policies is: will they be able to deliver growth? Corporate tax cuts didn’t encourage further investment when interest rates were rock bottom for five years. Why would they now?”

Instead, it is more likely that any reflation will be light. Growth may be a little better under the Trump regime but it is unlikely to be dramatically so. High household and national debt, the challenges of improving productivity and waning demographic drivers will weigh heavily against growth gains. Any material move up in interest rates would have a negative impact on the economy. This outlook contrasts sharply with the one from just six months ago:

“The assumption just six months ago was that we were in a long period of stagnation. Now, it is more likely that we will see a brief upside and then a hit as a result of the global macroeconomic uncertainty.”

The conventional wisdom that bonds act as a hedge for equities is going to be tested. There are currently high starting yields for bonds but it is uncertain that these can continue. Projections were circulated that suggested a 30% decline in equity would result in UK bonds going into negative territory. In this environment, low returns are the new normal.

With bonds acting as a buffer rather than a hedge, advisors identified foreign currencies (the Japanese Yen, the Swiss Franc), emerging markets bonds and gold as the probable beneficiaries. However, the challenge for advisors and their clients is that these asset classes are unlikely to provide the same degree of protection as bonds historically have done.

A couple of delegates commented that bonds have substantial amount of ‘nuance’ that is not reflected in the equity markets. Investment grade is more correlated to government bonds than high-yield; however, in this environment, a return of 4% is high risk and likely to prove uncomfortable for many investors.

Political risk only serves to intensify the investor headache:

“What we need to ask is whether Trump and Brexit when taken together build up to a global hurricane. If Trump fails, will this result in the election of someone even more radical? Or are these gales that will eventually blow out?”

The discussion progressed to how clients have responded to these market conditions in 2016. Many delegates observed that their clients are holding cash as a buffer – sometimes, to the tune of 30% of the overall portfolio. One delegate summarised the client perspective:

“Cash doesn’t give us nightmares.”

In other cases, investors had moved into real assets with some anecdotal examples of positions being taken in airline leasing, student accommodation and other illiquid assets. Even still, there is a prevailing sense that clients are feeling pressured to move into asset classes that are not their natural home.

One delegate commented that ETFs had also seen outflows with a clear rebalancing out of bonds into (emerging markets) equities. The question remaining was how to diversify, with gold, infrastructure, inflation-linked or indexed products and factor-based investing all under consideration.

The round-table served as a reminder of how far removed the current discussions of this community of advisors are from those at the start of the year. In January 2016, advisors witnessed a meltdown in global equities over fears pertaining to Chinese growth. With 2017 already projected by one advisor to be “the year of living dangerously”, the pressure will mount on advisors to understand and explain not just the moments (or periods) of market volatility, but the underlying causes that drive them.

The concluding remarks strongly suggested that careful expectation-setting with clients is critical. After all, there are still returns to be had – but with those returns come greater risk.